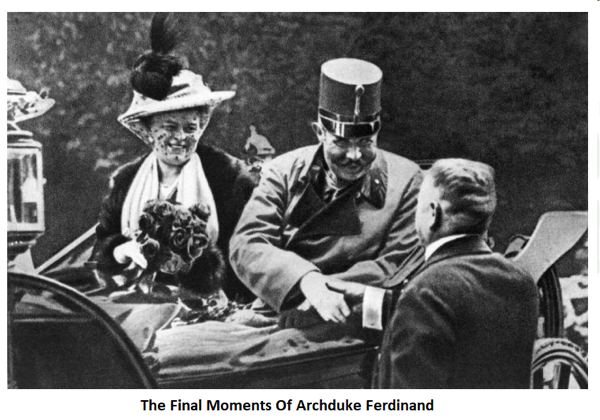 On this day in history, June 28, 1914, the driver for Archduke Franz Ferdinand,  nephew of Emperor Franz Josef and heir to the Austro-Hungarian Empire,  made a wrong turn onto Franzjosefstrasse in Sarajevo.

Just hours earlier, Franz Ferdinand narrowly escaped assassination as a bomb bounced off  his car as he and his wife,  Sophie,  traveled from the local train station to the city’s civic city.   Rather than making the wrong turn onto Franz Josef  Street, the car was supposed to travel on the river expressway allowing for a higher speed ensuring the Archduke’s safety.

Yet, somehow, the driver made a fatal mistake and tuned onto Franz Josef Street.

The 19-year-old anarchist and Serbian nationalist, Gavrilo Princip, who was part of a small group who had traveled to Sarajevo to kill the Archduke,  and a cohort of the earlier bomb thrower, was on his way home thinking the plot had failed.   He stopped for a sandwich on Franz Josef Street.

Seeing the driver of the Archduke’s car trying to back up onto the river expressway, Princi seized the opportunity and fired into the car, shooting Franz Ferdinand and Sophie at point-blank range,  killing both.

That small wrong turn,  a minor perturbation to the initial conditions, or deviation from the original plan,  set off the chain events that led to World War I.