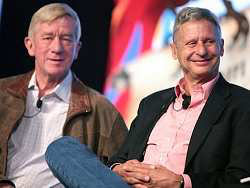 Libertarian presidential candidate Gary Johnson recently sat down with conservative journalist Guy Benson for a wide-ranging interview. Among the topics they discussed was the future of the U.S. Supreme Court.

Benson began by asking Johnson about recent comments made by his running mate, former Massachusetts Gov. William Weld, in which Weld named Justice Stephen Breyer and Judge Merrick Garland as the sort of judicial candidates that the Libertarian ticket would be considering.

“Bill has backed away from naming those names,” Johnson told Benson.

That disavowal will no doubt come as a relief to many libertarians. This is the same Stephen Breyer, after all, who joined the pro-government majority in the eminent domain debacle Kelo v. City of New London. It’s the same Stephen Breyer who dissented in the gun rights cases D.C. v. Heller and McDonald v. Chicago. The same Stephen Breyer who frequently votes to grant broad leeway to police and prosecutors in Fourth Amendment cases. As for Merrick Garland, President Obama’s languishing pick to replace the late Justice Antonin Scalia, his record, as I’ve previously noted, “reflects a version of legal liberalism that tends to line up in favor of broad judicial deference to law enforcement and wartime executive power.” Breyer and Garland are not exactly libertarian legal heroes.

According to Johnson, what Weld was really trying to accomplish by name-checking Breyer and Garland was to “point out…that we were really going to be bipartisan, that we really were trying to bring together both sides of this.” Nevertheless, Johnson conceded to Benson, “I think Bill if he had it all to do over again he would not have named names.”

Benson then asked Johnson about his opposition to imposing “litmus tests” on SCOTUS nominees. “Would you have any litmus tests for a Supreme Court justice on cases like Kelo, for example, cases that really matter to libertarians, libertarian principles?” Benson asked.

“Yeah I think Kelo is one that really does stand out,” Johnson responded. “Although we don’t have litmus tests, but Kelo really stands out as a litmus test, in my opinion.”