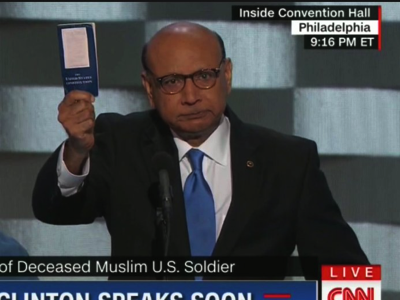 The father of a fallen American Muslim soldier openly rebuked Donald Trump’s proposed ban on Muslims to the country, asking if the Republican nominee for president is familiar with the rights granted by the Constitution to all Americans.

Khizr Khan’s family paid the ultimate sacrifice in 2004 when his son, Capt. Humayun Khan, was killed while serving in Iraq. Khan and his wife appeared Thursday evening at the Democratic National Convention in Philadelphia to support of nominee Hillary Clinton, sharply criticizing Trump’s divisive rhetoric against Muslims.

“Donald Trump, you’re asking Americans to trust you with their future. Let me ask you, have you even read the United States Constitution? I will gladly lend you my copy,” Khan said, removing a pocket Constitution from his suit jacket, to roaring applause in the arena. “In this document, look for the words, look for the words ‘liberty’ and ‘equal protection of law.’”

“Go look at the graves of brave patriots who died defending the United States of America,” Khan said to Trump. “You’ll see all faiths, genders and ethnicities. You have sacrificed nothing and no one.”

Trump has repeatedly called for Muslims to be banned from entering the U.S. in response to terrorist attacks over the past several months. Khan called the Republican nominee “a divider” and said that if Trump’s policies were enacted, his son, who died to save fellow soldiers, wouldn’t have even been in America.

“Like many immigrants, we came to this country empty-handed. We believed in American democracy, that with hard work and goodness of this country, we could share in and contribute to its blessings,” Khan said on the final night of the Democratic convention.

He said he and his wife were lucky to raise their three sons in a country where they were free to be themselves and follow their dreams.

Khan called on Americans to vote for Clinton, who he called “a healer” and “the strongest, most qualified candidate.”

“We cannot solve our problems by building walls, sowing division,” Khan said. “We are stronger together.”