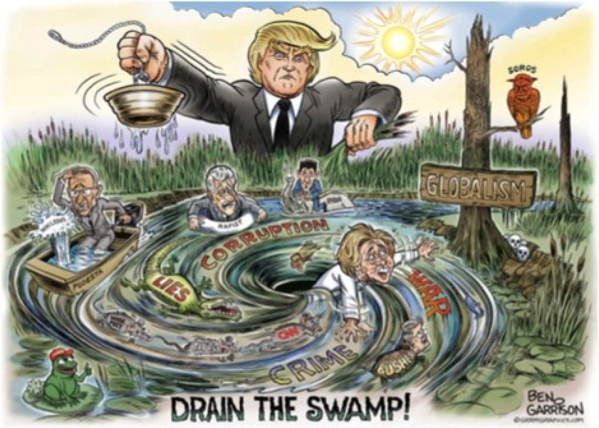 Is is really draining the swamp when you embrace crony capitalism? Via John Stossel:

President-elect Trump says he’s uniquely qualified to “drain the swamp” in Washington, D.C. He can do it, he said at one debate, because as a businessman, he understands American cronyism. “With Hillary Clinton, I said, ‘Be at my wedding,’ and she came to my wedding. You know why? She had no choice because I gave.”

He said that’s why he gives money to politicians from both parties. “When they call, I give. And when I need something from them two years later, three years later, I call them. They are there for me!”

That’s crony capitalism. Ideally, laws are applied equally; no one gets a special break because he gives money. But today’s complex government allows the politically connected to corrupt… most everything.

Even parts of the government swamp designed to protect consumers, like Dodd-Frank banking rules, get corrupted. Banks watch little changes in rules far more closely than you ever will. Then they exploit them. Bank lobbyists make money off complex laws like Dodd-Frank. They fight tooth and nail to keep them, not abolish them.

Congress recently almost got rid of one obvious example of crony capitalism, the Export-Import Bank. To encourage exports of American products, bureaucrats give loans to Boeing and other big companies.

Some principled Republicans tried to eliminate this corporate welfare, but Ex-Im loans were voted back in during the final hours of budget negotiations.