An interesting nugget from the big new Pew Research Center poll of the 2016 election: Among voters under age 30, Donald Trump is at 21 percent … and Gary Johnson is at 22 percent.

Yes, Trump is in danger of finishing third among young voters — at least according to this one poll. But it’s not the only one showing him struggling with them.

They combined for 22 percent, while Trump was again at 21. (Stein wasn’t an option in the Pew poll.) 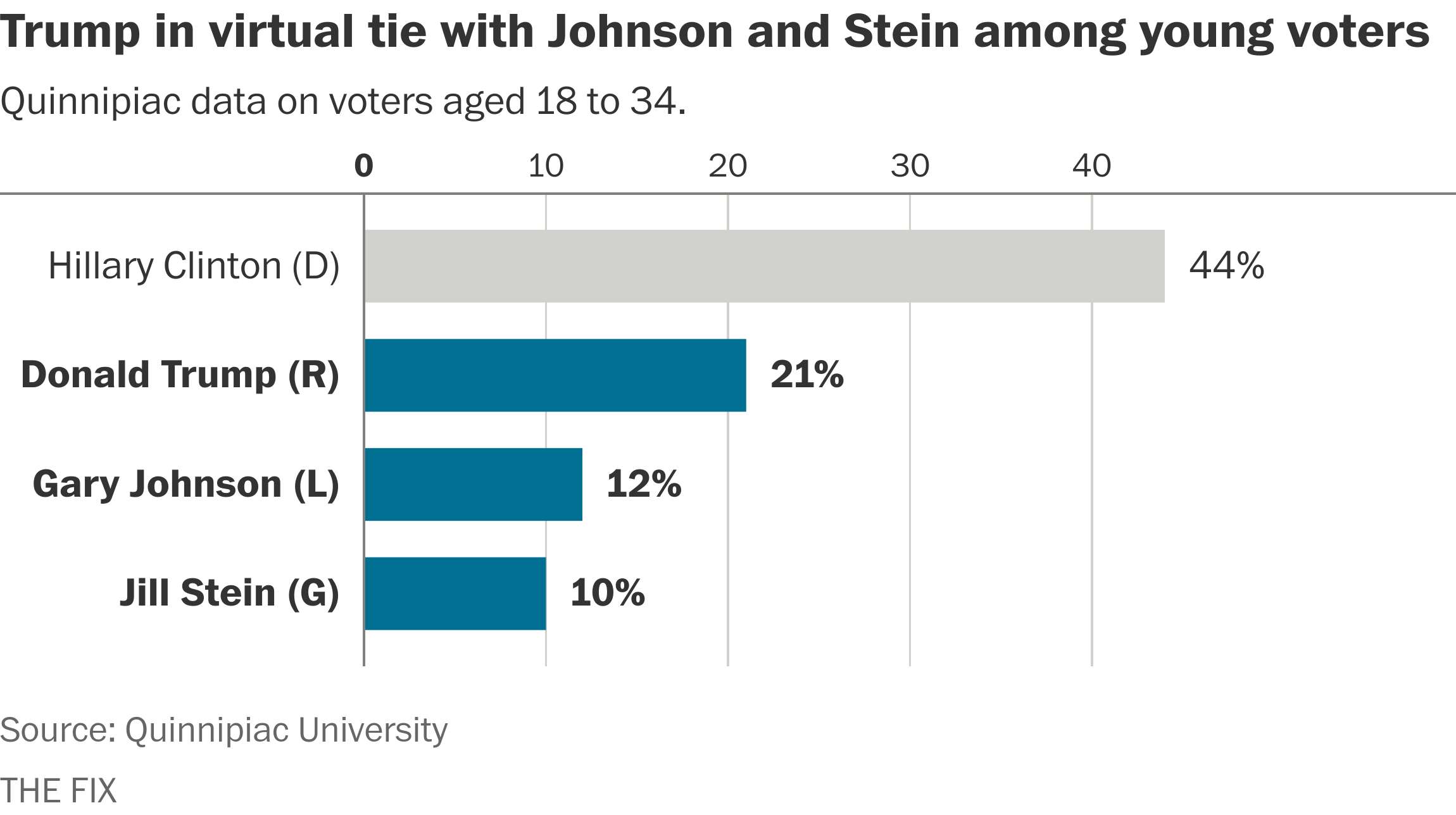 Suffolk University also showed Johnson carving off a significant portion of young voters (18 to 34), at 15 percent, to Trump’s 27 percent. 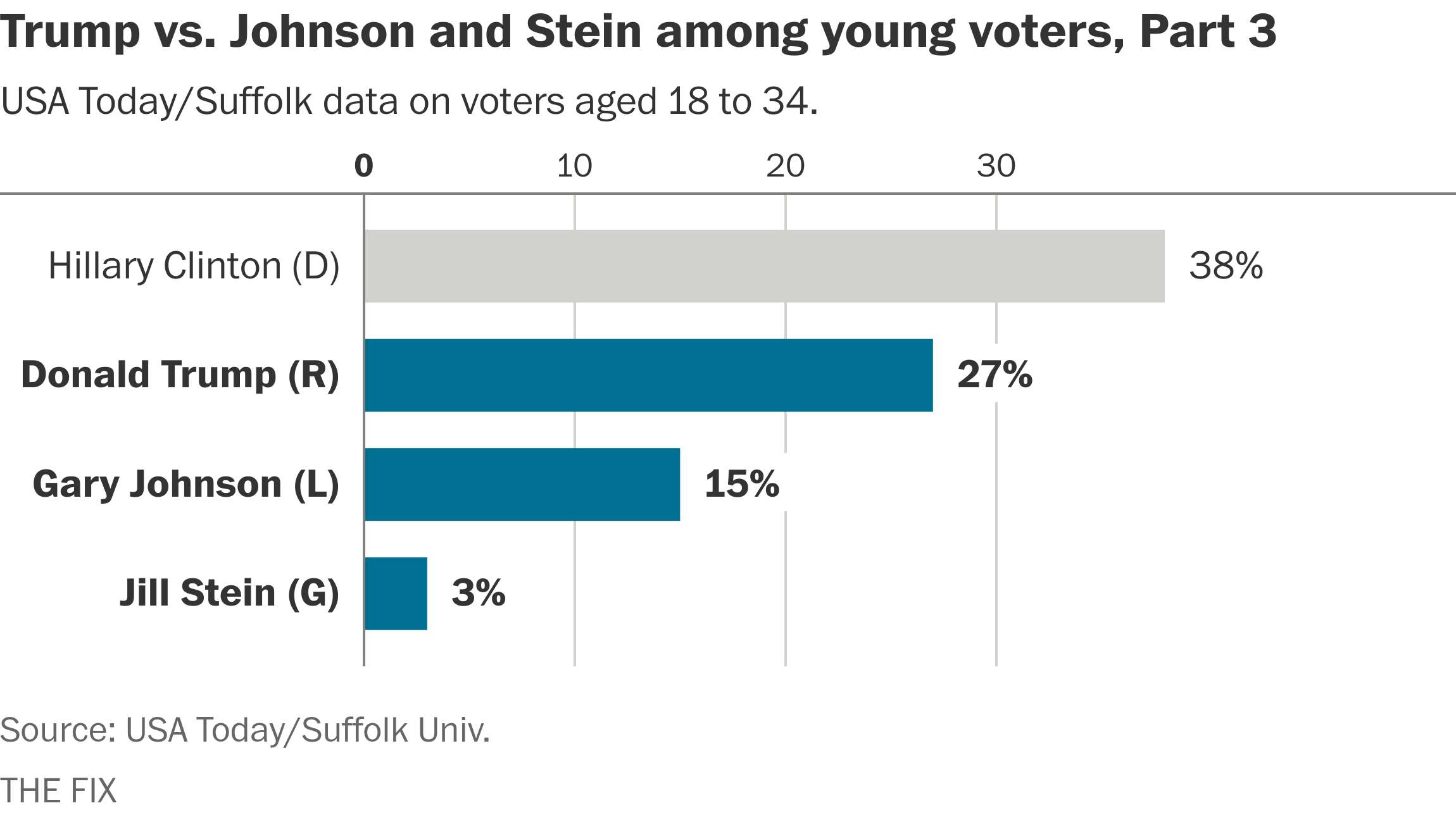 And Fox News had Trump up just 30 to 18 on Johnson among this same demographic.

So could Trump actually finish behind Johnson — or even take less of the youth vote than the two top third-party candidates, as the Q poll suggests?

It’s possible. But we’re dealing with small subsamples with large margins of error here. In addition, earlier polls with age-demographic data don’t show Trump struggling quite so much. A Washington Post-ABC poll showed Trump leading Johnson and Stein 32 to 11 t0 7 (although the sample there was voters ages 18 to 39), and Monmouth University last month showed Trump at 30, Johnson at 14 and Stein at 6 among voters 18 to 34. Still not great numbers for Trump, but not quite as bad.

It’s also generally true that third-party candidates poll better than they perform on Election Day, when voters might opt for someone who has a much better chance of actually winning. American politics is a two-party system for a reason.

It’s also not clear that all or even most of Johnson’s support comes at Trump’s expense. The Pew poll, for example, showed Hillary Clinton leading Trump by nine points with or without Johnson in the race — 45 to 36 with Johnson and 51 to 42 without him.

FiveThirtyEight has a good breakdown of just where Johnson’s support is drawn from — and how it might actually come more from Clinton. Harry Enten writes:

The majority of pollsters (12) have Clinton’s margin over Trump shrinking when at least one third-party candidate is included. The difference in margins, however, varies among pollsters, and a few, such as Ipsos, have Clinton’s lead rising by the tiniest of bits when at least Johnson is included. Overall, including third-party candidates takes about 1 percentage point away from Clinton’s margin, on average.

But it’s also true that young people are a much friendlier demographic for third-party candidates. They are more likely to identify as independents and supporters of third parties, and it’s no coincidence that they have led the way for politicians like Ron Paul and Bernie Sanders in recent years.

Young people also happen to be among the most resistant to both Trump and Clinton. Post-ABC polling shows about 6 in 10 don’t like Clinton and 75 percent don’t like Trump. Both are the highest among any age group.

That’s a lot of young people looking for an alternative. If Gary Johnson and/or Jill Stein are to be the rare third-party candidates to gain traction, it will probably start with them.