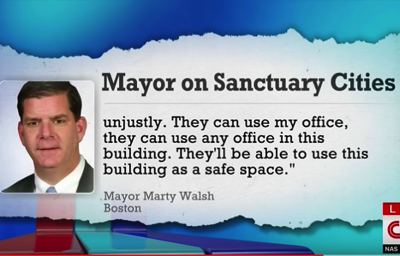 As President Trump moves forward on his campaign promises regarding illegal immigration, the progressive left is (delightfully) apoplectic. Sanctuary cities, in particular, are of special significance to them as Democrat mayors across the nation insist that they will resist Trump’s efforts.

Boston mayor, Marty Walsh, is taking his “resist we much” stance one step further and has declared that Boston’s City Hall is now one big “safe space” for illegal aliens.  He asserts that illegals can move in and live right there at City Hall, presumably “safe” from deportation.

It is not clear how far Walsh intends to go in harboring and protecting Massachusetts’ illegal aliens from ICE.

With a visibly diverse group of city employees and local elected officials huddled around him, Walsh said the city has been, and always will be, a safe place for immigrants, no matter their status.

“Boston was here for me and my family. And for as long as I am mayor, I will never turn my back on those who are seeking a better life,” he said. “We will continue to foster trusting relationships between law enforcement and the immigrant community. And we will not waste vital police resources on misguided federal actions.”

Walsh said he’s not intimidated by Trump’s fiscal threats — even though the city has approximately a half-billion dollars in federal revenue at stake, a spokeswoman for the mayor’s office said.

In fact, Walsh went so far as to open the doors to City Hall itself for anyone fearing deportation.