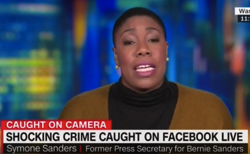 This is because we’ve all been catechized that only white males can commit hate crimes.

This from democratic strategist Symone Sanders, who said that the Democrat Party doesn’t need white people.

“I’m gonna say something that’s probably not very popular. We cannot callously go about classifying things as a hate crime. Motive here matters. So, was this for hate of Donald Trump…or was this hate for white people? Because that matters, ” said Sanders.

“If we start going around and anytime someone says or does something egregious or bad and sickening in sense. In connection with the president-elect Donald Trump or even President Obama for that matter because of their political leanings, that is slippery territory. That is not a hate crime,” Sanders said.

“Hate crimes are because of a person’s racial ethnicity, their religion, their gender, a disability,” she said.