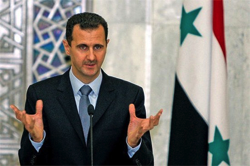 DAMASCUS, Syria — Syrian President Bashar al-Assad says he hopes the most recent cease fire in the five-year civil war will allow his army to get back to “normal peacetime genocide” operations.

The conflict has involved a multitude of actors, making it difficult for government forces to “cull” any one group into “extinction,” he said.

“Back in the old days, before the war, mass executions were much simpler,” said Gen. Ali Abdullah Ayyoub, Chief of Staff of the Syrian Army. “But then a few bad apples had to go and complicate things by fighting back.”

Ayyoub added that the Syrian military really needs to get “back to its roots” of killing primarily unarmed women and children, rather than fighting the diverse, well-armed groups of men it has recently.

Syrian leadership thinks the ceasefire will give them a much-needed opportunity to reset and refocus their efforts. Some think the many refugee camps along their borders are a good place to start, as they offer plenty of realistic victims to train on.

“When you’re trying to do a genocide, you’re really looking for two things: a weak, demoralized population, and an international community that doesn’t give a shit,” said Ayyoub. “So I think the refugee camps offer plenty of training areas that will let our troops get back to doing their doctrinal mission sets.”

The United Nations is confident that the ceasefire will prove “at least as effective as the ones in Yemen and Ukraine.”

Assad has even invited U.S. Presidential candidate Gary Johnson to view the situation first-hand. He offered to take Johnson on a tour of their national botanical gardens, where the Aleppo, a rare breed of desert tortoise, was recently saved from extinction.

Assad also guaranteed that the Syrian government will “definitely not break the ceasefire in the first five minutes like we always do.”

UPDATE: An earlier version of this article misidentified Aleppo as a type of yellow Dutch cheese. It is Gouda.