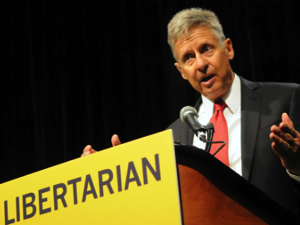 While making a campaign stop in Miami this week, Gary Johnson and running-mate William Weld talked to staff at Fusion, the Hispanic television-station turned multi-pronged millennial media factory. In a write-up of the event, Fusion contributor Andrew Joyce focused on Johnson’s rejection of hate-crime legislation—something he vetoed as governor of New Mexico.

Joyce isn’t convinced by Johnson’s answer, which he sums up as asserting “that hate crime legislation constitutes some kind of Orwellian thought policing.” But that misstates Johnson’s position, making it sound like the Libertarian candidate’s opposition is some sort of alt-right, anti-PC paranoia. The problem isn’t that hate-crime laws punish people for merely thinking hateful thoughts or holding unpopular beliefs—they don’t—it’s that they empower the carceral state.

It’s also silly to say (as Joyce does) that we punish manslaughter differently than murder based on a person’s motivation and hate-crime laws are no different. With the former charges, the motivational difference is the difference between intentionally taking someone’s life and doing so accidently or through negligence, not a matter of arbitrarily deciding some criminal intentions are worse than others.

The logic of hate-crime laws, meanwhile, says that while many murders, assaults, rapes, acts of vandalism, and other crimes are committed out of rage and hatred, it’s only a narrow type of rage and hatred that deserves extra opproprium—and punishment. A hate crime enhancement can lift misdemeanors into felony territory and potentially double prison sentences.

All of this might make social-justice advocates feel good, but it serves little public-safety purpose. People who commit the kinds of crimes we define as hate crimes, whether calculatedly or spur-of-the-moment, aren’t bound by rational thinking—they’re not going to be deterred by the fact that their particular bias could, if caught and convicted, add additional time to a theoretical sentence. There’s similarly little evidence that extra severe sentencing somehow benefits “hateful” offenders more than offenders of other varieties, thereby facilitating a rehabilitative function.