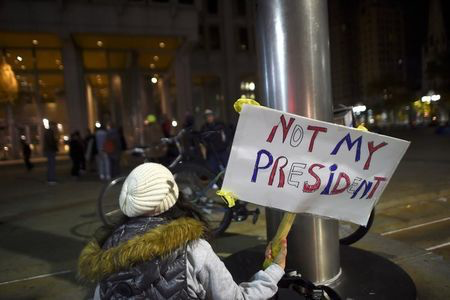 Thousands of demonstrators are expected to turn out in Washington next week for protests aiming to “shut down” the inauguration of Donald Trump as the next U.S. president, organizers said on Thursday.

Protesters will attempt to close down 12 security checkpoints at the U.S. Capitol, where Trump will take the oath of office on Jan. 20, and along the 2.5-mile (4-km) parade route down Pennsylvania Avenue, according to leaders of a group called DisruptJ20.

“We want to shut down the inauguration,” organizer David Thurston told a news conference. “We want to see a seething rebellion develop in this city and across the country.”

A representative of the Trump transition team could not be immediately reached for comment, nor could a spokesman for the District of Columbia police.

After a deeply polarizing campaign, Trump’s surprise victory in the Nov. 8 election has inflamed passions across the political spectrum.

The website DisruptJ20 seems to be the clearing house for the left’s plans and describes itself in this way:

On Friday, January 20, 2017, Donald Trump will be inaugurated as President of the United States.

We call on all people of good conscience to join in disrupting the ceremonies. If Trump is to be inaugurated at all, let it happen behind closed doors, showing the true face of the security state Trump will preside over. It must be made clear to the whole world that the vast majority of people in the United States do not support his presidency or consent to his rule.

Trump stands for tyranny, greed, and misogyny. He is the champion of neo-nazis and white Nationalists, of the police who kill the Black, Brown and poor on a daily basis, of racist border agents and sadistic prison guards, of the FBI and NSA who tap your phone and read your email.

He is the harbinger of even more climate catastrophe, deportation, discrimination, and endless war. He continues to deny the existence of climate change, in spite of all the evidence, putting the future of the whole human race at stake.The KKK, Vladimir Putin, Golden Dawn, and the Islamic State all cheered his victory. If we let his inauguration go unchallenged, we are opening the door to the future they envision.

A website called ItsGoingDown provides a window into the minds of these protesters:

The price of failure is dire. Imagine the worst case scenario, in which millions of fans cheer for Trump while fascist gangs beat up protesters around Washington, DC. That would embolden right-wing thugs all over the country, provoking a new wave of racist attacks and recruiting: it would make 2017 the equivalent of 1932 in Germany. At the very least, we owe it to those who are determined to demonstrate in DC to make sure that they are not alone.