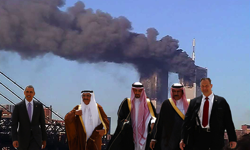 “The president intends to veto this legislation. We’ll see what Congress chooses to do from there,” White House press secretary Josh Earnest told reporters at his daily briefing. He lauded the resilience of the victims’ families and said that despite the difference of views on the lawsuits, “there’s no effort to diminish the sacrifice that they have made or the pain that they have endured or the heroism that they have displayed.”

The bill would allow families to sue the Saudi Arabian government. The administration has long argued that this would set a dangerous international precedent, inviting citizens of other countries to sue American service members and U.S. government officials in their own countries’ courts.

Family members of those who died on Sept. 11 issued a letter on Sunday, the 15th anniversary of the deadliest attack on American soil, urging the president to sign the legislation, known as the “Justice Against Sponsors of Terrorism Bill.”

The right to sue the Saudi government “is important for our nation,” they wrote, “because it will help to deter state-sponsored terrorism.”